Moblogging: Kids day at the rink 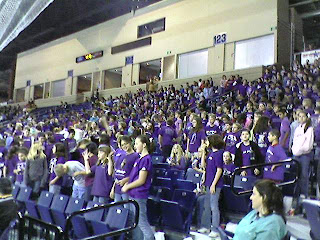 Just a few of the 2500 4th and 5th graders at Ford Arena for the Wildcatters Think at the Rink game.

Man that was a fun game. The kids were amazing, yelling and screaming and dancing. That's the loudest I think that building's been for a game in a long time. You had the kids chanting "Let's go 'Catters," ooohing and aaahing when there were hits. They even booed when Mississippi scored their lone goal.

Of course, they had to do some learning too while they were there, as the team did some stuff to help them prepare for the TAKS test (the state assessment) which comes up in April I think.

The local paper liveblogged the game if you're interested.

Thought by Justin @ 10:33 AM
Email ThisBlogThis!Share to TwitterShare to FacebookShare to Pinterest
Filed under: Sports